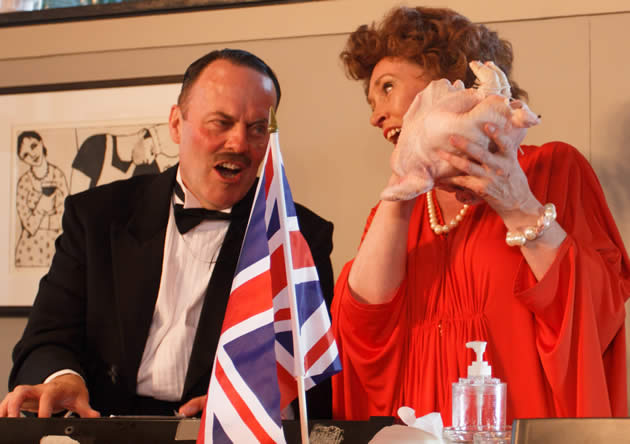 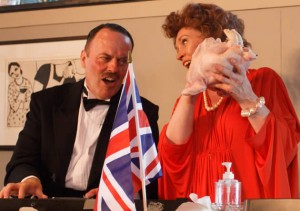 I had an unexpected treat last night.  My friend Annie took me to see:  “Fanny and Johnnie Cradock Cook the Great American Songbook” at the Hen and Chicken, Southville.

Annie’s friend is theatre producer Sheila Hannon.  I met Sheila at the entrance of the venue – she was unassuming as she sat there checking people in.  Although she had no idea who I was when she met me (and I had no idea who she was at that point)  she took my hand in both of hers, stood up, and gave me the warmest greeting, saying how pleased she was to meet me.

In a fleeting moment, as she held my hand for what seemed like an age, looking me full on in the eyes with the warmest and most welcoming smile.   I felt as if I had come along as the show’s special guest.

At that point all I knew was that Sheila was the person on the door, ticking off names, but somehow I knew in an instant I had met an interesting person who I would like to meet again.

Fanny and Johnnie is performed by actress and jazz singer Kate McNab and John Telfer (who  plays Alan Franks in The Archers).  It is a musical show that has comedy, demented cookery lesson, popular cultural history and great music, while the audience are served dinner  – a two-course Abigail party- esque delight featuring Prawn Cocktail and Chicken a la Falklands (vegetarian option available to Fanny’s digust!).

So here we were having dinner in a pub whilst watching theatre at its very best.   What heartened me was that the audience were not the usual types that I’m used to seeing in theatres or classical concerts.  Just Bristol folk, who fill the streets, shops, pubs and football matches in the local area.

This resonated with me as  I was still feeling bruised from attending a recent Nigel Kennedy concert at the Colston Hall where all hell was let loose because I dared to breath and utter a few hushed words  to my companion while Nigel was improvising  a lively piece of gypsy jazz with his fellow musicians.

I experienced  verbal aggression from fellow concert goers (two separate people) who were outraged at me expressing a reaction not ordained by the concert-goer rule book that no one tells you about until you break the rule.

My spoken words, while Nigel played, were expressing enthusiasm for the music, but that wasn’t of any consequence to anyone as I ended up having to move my seat feeling oppressed.

The irony was that I was actually watching a “rule-breaking” musician “of the people” who has tried to popularise classical music and open it out to a wider audience other than those who felt the need to enforce stifling and restrictive audience rules via an all-exclusive etiquette.

Incidentally, Nigel Kennedy’s concert was deemed at such a level that even the front of house staff felt the need to be subversive with flyers promoting a forthcoming Julian Clary show.

One Colston Hall employee told me and my companion on our way out that they weren’t allowed to put Julian’s flyers with Nigel Kennedy’s programme (orders from above),  but if we wanted a flyer he would get one for us – all spoken in hushed tone to us alone.

I guess myself and my companion must have been singled out as  people who could be told that Julian Clary was soon to be performing there.

But no such problem at the Hen and Chicken for this show.   There was a community spirit, a feeling of being amongst extended family from different generations, enjoying a show, a meal together and a bit of a sing song.

The actors – who were top class, both great musicians/singers and actors – interacted with the audience, got us laughing, singing and enjoying a fine hearty retro-styled meal.

So I was intrigued by this production that had returned following a sell-out run and even an appearance on the BBC’s The Hairy Bikers.

Clever writing, weaving in comedy, social history and biographical details of these eccentric characters.   The actors gave us a snapshot into the lives of these contradictory people, who said so much in a glance or lines littered with double entendres.

A backdrop of American songbook classics that helps tell a story of these TV icons from the past, while being a brilliant comedy device – Kate McNab aka Fanny singing “I’ve got you under my skin” in all serious and emotional intensity – whilst her hands up a chicken’s backside was side-splittingly funny and not to be forgotten.

So who wrote this extraordinary piece – that elicited the very best performances from such accomplished actors?  It was Sheila and no mention of her name anywhere!  You can read more here about this production and Sheila’s theatre company here. More dates are planned, thank goodness.

I’ll leave you with the words of a very famous continuity error – voiced in this show by “Johnny”: “… and I hope all your donuts look like Fanny’s”.