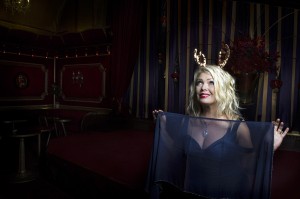 Who could resist a chance to go to Kim Wilde’s Christmas Party?   In my office asking those under 25 years I did get a blank expression when I excitedly said I’m on Kim Wilde’s guest list.  I got a better response when I started singing: Looking out a dirty old window … or maybe they were just being nice?

Kim Wilde is a generation thing and I am a kid who grew up in the 1980s when she burst forth  in 1981 with her worldwide smash hit ‘Kids In America’.  Yes Kim Wilde, with one of the few hair cuts to survive the 1980’s with credibility.  She looked great, had a distinctive voice, sang good pop, wore cool clothes and gave a good pout.

Born in Chiswick, West London to legendary 1950’s British Rock’n’Roll singer, Marty Wilde, and his wife Joyce – a member of the singing group, The Vernons Girls.  She found instant fame with her first single release (written by her brother Ricky and father) which paved the way for a recording career which produced ten albums and in excess of thirty singles, bringing world wide fame and millions of record sales.

In 1996 Kim quit music to bring up her two kids – with her husband and co-star in the hit musical Tommy, Hal Fowle.  She then changed career path and studied horticulture. This led her to do some TV work and became a gardening expert.  Put it this way, in this period Kim was the original Nigella (minus the baggage), with her Mae West eyes, curvaceous figure and wholesome Doris Day smile.

Following the recent release of her album: “Wilde Winter” Kim is touring after a break in performing for over 10 years.  Perhaps the impetus for the tour was her drunken sing song on the tube akin with sparkly antlers after a party, that went viral with over 2 million views on You Tube?  Live, Kim brings her Christmas Party, with special guest Nik Kershaw, to three dates this December, including London’s and Bristol’s 02 Shepherds Bush Empire on Saturday 21st December.

Let’s say the night was made up of 3 parts.  She begins with the “hits”.   She gives  us what she thinks we want to hear: Singles like ‘Chequered Love’, ‘Water On Glass’, ‘Cambodia’, ‘You Came’, and ‘Four Letter Word’.

The peak of these songs is when you hear her voice way up above the music,  especially on ‘Four Letter Word’, her voice is very strong.

The next part she sings more recent stuff from the new album.  This surprisingly raised the bar.   Vocally accompanied by her brother Ricky and eye-catching niece the tunes are accomplished and make a good first impression.  Again hearing Kim’s voice up front really pays off.

And the final part the party really gets started, this includes Rockin’ Around The Christmas Tree and cheesy covers from Slade and Erasure.  If I could have anything for Xmas it would be that Kim releases “A little respect”.    At this point everyone is in the party mood  and delighted with the fake snow and Christmas spirit.

It’s a well thought through set, with good visuals – beginning with footage of Kim as a child, right through to the more cuddly grown up version.  She thanks us for watching her grow up in public and modestly she tells us she is a wife and mother, but still a rock chick.

Kim has oodles of charisma and charm and she knows how to work a crowd for over 2 hours of set.  She leaves us waiting for two encores before we get the one song we have waited for, but then after what we had already heard, we weren’t so sure.  Catch artists like Kim Wilde while you can, you won’t be disappointed.