It began with: “Claire would you do some modelling for Anna Perra?”

Me?  Deep breath, suck in teeth and ponder. Is this a Kate Moss moment (20 years and two sizes too late), where you are stopped in a city centre, handed a business card, which states: “top modelling agency” and then you hear the words:

“Ever considered being a model, give me a call?”

Then bang into fame accompanied by a pop star boyfriend on your arm.

Nope, this was a friend of a friend who wanted some “real women” models for her fashion show in Somerset.

So what did I do?  Well, I said a tentative and nervous “yeah” and then went on a diet!

Fast forward for a moment to the end of this story: I lost no weight despite the cutting back on alcohol and treats.  I am a size 14 and will always stay that way I guess. 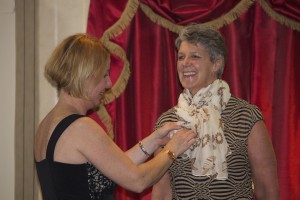 “Yes I have a passion for promoting casual elegance and dressing women in a way that makes them look great, no matter their size or age.” Anna Perra

She opened Anna Perra Fashions in Shepton Mallet High Street in 2012 and sells her own designs and women’s clothing from top fashion houses in Italy, Spain, the Netherlands and Denmark.

Anna sums up her concept:

“Yes I have a passion for promoting casual elegance and dressing women in a way that makes them look great, no matter their size or age, but it actually becomes much more, affecting their self-esteem and confidence and I see a transformation that has a wider impact on their lives and relationships.”

Shepton Mallet has a rich clothing heritage, from medieval times as an important centre for the wool trade to being the place John Lewis was born and, more recently retail chain New Look viewing the place as an important base to develop it’s successful brand and concept.

Anna admits that starting her business came late in life, but that’s her philosophy:

“It’s never too late to be whoever you want to be”.

Being a “real women” 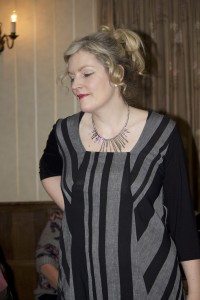 Me doing the casual look.

The “real women” concept isn’t new.  The Dove Campaign for Real Beauty was conceived 10 years ago after finding in their research that only 2% of women consider themselves beautiful.  The owners of Dove –  Unilever –  wanted to change the definition of beauty and free women from the chains of self-doubt and insecurity.

Marks and Spencer’s advertising frequently celebrates women of all ages and sizes and I often enjoy seeing the older women looking just as good as the 20-somethings in their ad campaigns.

Why is the real woman concept important to the big retail brands?  Well the average British woman  is size 16 and often she doesn’t feel good about herself, so it’s a no-brainer to serve up normal women that look and feel great in  clothes that actually fit and suit them rather than being women that don’t exist.

What do “Real Women” think? 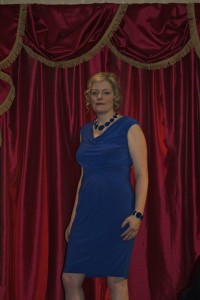 I was one of eight “real women models” for the sell-out Anna Perra fashion show at the Swan Hotel, Wells, on Feb 6th, which also raised money for Macmillan Cancer Research and was sponsored by Barclays Bank.

We wore a collection of Cecilia’s designs – an Italian haute couture range.  Cecilia joined us on the night and appeared really pleased with her “real women” models – a first for her as she usually works with 6 ft professional models in Milan!

On the other hand we were very real, reflecting sizes 8 to 18, and age range of 38 to 65 years.  Most of us were first time “real women” models.

“this is not the sort of thing I do.  I am well out of my comfort zone”. 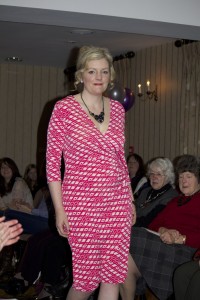 It was left to Anna H’s brother to reassure her: “You have been asked because you can do it”.

After the show, I mentioned what Anna H said about being a “token fatty” to my male friend who came to the show and he shrugged his shoulders and responded:

“I didn’t realise anyone was big, everyone looked slim to me”.

After the fashion show I asked Anna H how she felt now it was over:  “I feel elated,  I never thought I would have or could have done it.”

Another real women model, Karen Horne, 49, told me she felt  “very apprehensive” about getting involved.

She continued: “Now I know that I probably wear too much black.    Anna has put me in colours I never would have considered for myself and I’ve realised you have to try things on and not go for the same style and think that’s ok.”

Margaret Stott, age 65, had modelled for Anna Perra before. 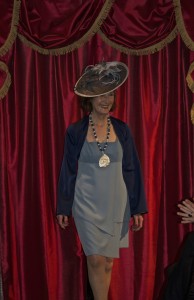 “This feels like an achievement, something I know I can do now that makes me feel proud of myself. Margaret Stott, age 65,

“I was very nervous the first time, I don’t like being looked at, but this feels like an achievement, something I know I can do now that makes me feel proud of myself.

Helen Lacey, aged 38, was the only one of us that came complete with uber confidence, which thankfully she used to help the rest of us feel better about ourselves.

Helen, like Margaret, had modelled before for Anna Perra.   She told me:

“I love doing this, I am an exhibitionist deep down, when else can I strut my stuff and have a great time in amazing and flattering clothes”.  Helen, who runs her own business, was most helpful being in front of me in the line up, so I could quickly learn how to “strut my stuff” that little bit better by following her great example.

So did we cut it as models to the real women who came along?  Sasha Cansdale from Croscombe, nr Wells, a 42 year old legal secretary said it was “refreshing” and went on to add:

“Honestly it made no difference at all regarding age and size.   Think age and size is no obstacle and it was empowering and positive in message with regards to fashion and the feel to the evening and I think it makes people feel more comfortable.” 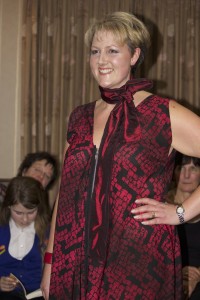 “I feel elated, I never thought I would have or could have done it.” Anna Hodges, age 44 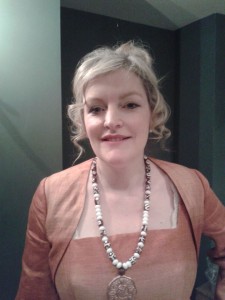 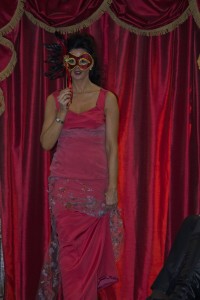 “I love doing this, I am an exhibitionist deep down, when else can I strut my stuff and have a great time in amazing and flattering clothes” Helen Lacey, age 38 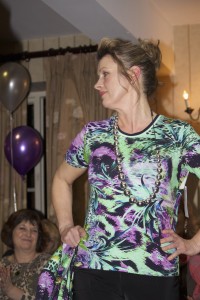 And for more fab photos check out my facebook page.