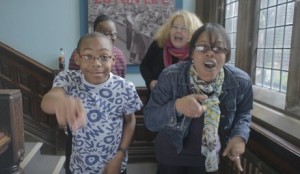 “Smile and the world will smile with you” so the saying goes and a principle that Luton Culture put behind their Museum Makers project: Pharrell Williams – Happy (we are from Luton) video.

“Luton often gets a lot of negative press and something that our Museum Makers often write on our ideas box wall is that they want to see more positivity in the town.”  So says Jemma Murphy, who is one of a very small number of people who conceived, delivered and facilitates Museum Makers for Luton Culture.

“Happy provided a perfect opportunity for this, it’s such a feel good track that gets everyone dancing and smiling”. 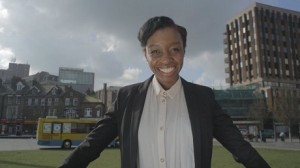 A perfect opportunity that Luton Culture’s Museum Makers turned into a digital engagement coup resulting in an overwhelming positive reaction in Luton and beyond.

The video uses one of the biggest pop tunes of the year sung by one of the biggest pop stars on the planet (Pharrell Williams).  Using everyday people from Luton, who mime and dance along to the song, all slices of Luton life are wonderfully reflected in a melting pot of culture and community that Luton actually is, and it does indeed make you smile along too.

Even the man himself embraced the video, Pharrell William’s team who manage his youtube channel got in touch with Museum Makers to ask them to upload it on 24hoursofhappiness.com sending the video all over the world.

In just 5 days there were 65000 views of the song. As I write, a week after it was launched, it’s looking like it will exceed 100,000 views. BBC 3 radio and local press have all covered the story. 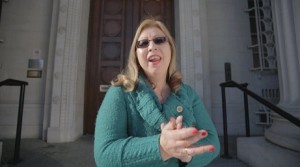 Museum Makers launched the video on a 10ft screen in the middle of The Mall in Luton to an incredible response from local residents. Jemma tells me they have had over 600 individuals write on Luton Culture’s facebook to say what makes them happy. Furthermore Museum Maker’s e-mail, twitter feed, facebook and instagram has been filled with really positive and inspirational feedback from Lutonians not only about how great they think it is to promote positivity in Luton but also how the video has made them smile.

Most importantly 80 additional Museum Makers were recruited since they began filming #lutonhappy and it’s clear as Jemma points out “the project has definitely raised the profile of Museum Makers”.

What is Museum Makers?

Museum Makers is team of people from the local community who are involved in “saving, cherishing, running and recreating Luton’s Wardown Park Museum”. In a climate of funding uncertainty and the need for museums to reach out to a wider audience using digital tools Museum Makers was a solution to helping this museum sustain itself as well as being what local people want it to be, a people’s museum if you like.

Luton Culture is a trust that manages services such as libraries, community centres, museums and arts centre. Museum Makers was one of Luton Culture’s bright ideas. My company, @tbxmarketing delivered this vision by developing the Museum Makers website,  a platform that delivers  creative challenges for museum to makers to sign up to under the categories:

The website matches challenges to individual “Museum Makers” and encourages people to get involved with the museum’s day to day.

Since launching towards the end of last year Museum Makers has around 700 recruits and the museum is now being driven by a dedicated army of individuals who care about their community and the museum’s  place at its heart.

This video project was put forward by the Museum Maker’s Project Team in collaboration with  Igniterr, CEO of NangTV,  (a signed-up museum maker) who filmed the video. They decided to push forward #lutonhappy as a project to make the community smile.

There were over 100 people in the video and around 50 of these were Museum Makers, the rest local people. The making of the video and project team for #lutonhappy was made up of 8 people who are all Museum Makers who volunteered 4 days of their time.

I have a feeling that the story won’t end here and that a lot of people will be smiling for some time to come in Luton.