A timeless collection
by Andy Sully 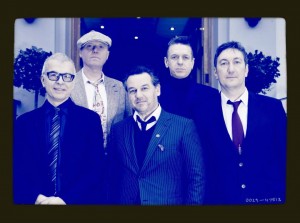 “Call the tune/Will you swoon?/As I croon” sang Bryan Ferry in Roxy Music’s Serenade. But pop crooning is slightly lost amid the urban clatter of  today’s musical landscape. It’s twin heydays in the post rock n’roll era were the Walker Brothers moodiness of the mid-60s and the sharp-suited shining pop of the early 80s.

Those are the two touchstones for Dutch musician Stephen Emmer on his new album International Blue, which boldly sets out its stall to reintroduce the male baritone voiced ballad for a modern audience. Not that this is a retro record – oh no, no, no!  There are strings, but understated and sympathetic not “60s” and there is keyboard, but there’s nothing “new wave” about it. International Blue exists in its own frame of reference and is all the better for it.

If you haven’t heard of Stephen before you will know many of the musicians he has worked with, including Billy McKenzie, the Lotus Eaters and Lou Reed. And on International Blue, the cast list is similarly familiar. Bowie mainstay Tony Visconti produces, and guest vocalists include Midge Ure and Heaven 17er Glen Gregory. Former Cure bassist Michael Dempsey also helps out.

The songs are simultaneously lush and orchestrated, but intimate – showing off the lyricists’ skills as well as that all-important croon. Glen starts the album with the big pop sound of Let The Silence Hold You, a less-gimmicky Heaven 17 belter; Midge’s melancholic but soaring effort Taking Back My Time is even better. The former Ultravox frontman is surely one of the most underrated of all British musicians – why did the music critics of the 80s hate him so? the moustache? “heightism”? It’s a mystery. Other highlights include the affecting Billy McKenzie tribute Untouchable, voiced by Glen, and a cracking closing trio: the elegaic  Break In The Weather, sung again by Glen Gregory – in a vaguely Bowiesque register; ecological lament Mama’s Mad, voiced by Costeau’s Liam McKahey, and the lost-among-the-bright-lights regrets of In The Mirror Reflected, another Gregory co-write.

Admirers of Richard Hawley and I Am Kloot’s John Bramwell already know the power of the modern croon, and International Blue confirms it. Grown-up pop songs do not have to be Adult Orientated!

Andy Sully is a senior broadcast journalist and music critic.