It begins with a few thousand of us gathered in an oversized cowshed, still with the whiff of its former inhabitants, not sure what to expect. 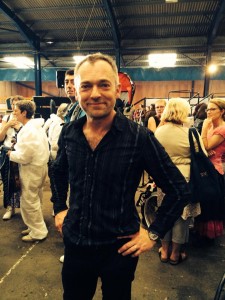 Charles Hazlewood started receiving acclaim in his 20′s and has gone on to conduct over 100 world premiers working with a mixed bunch of artists, including Wyclef, Professor Green, Nigel Kennedy and Steve Reich.

Entering this not-run-of-the-mill music venue in a drizzle of rain and ominous skies, we were here for Charles Hazelwood’s performance of Benjamin Britten’s Noye’s Fludde.  This was part of  (in fact the only event to be staged) of the reduced Orchestival, originally billed as a weekend festival.

“The opera is a unique and exceptional musical vehicle that has the power to bring people of all generations together,” said Ellie Velazquez, one of the event organisers.

This rang true for me as I was accompanied by my 81-year-old father and my 6-year-old daughter, both quite content to be a part of this musical extravaganza.

Hazelwood has embarked on an ambitious project with 100s of cast members.  Indeed Britten requested his piece be performed in a church or a large hall and certainly not in a theatre, using amateurs as well as professionals including lots of children.  Orchestival has therefore turned this into a community opera project featuring 500 plus children, a PO quintet and Kneehigh theatre company.

Noye’s Fludde was inspired by early 15th-century mystery plays of the Chester Mystery Cycle, which are a re-telling of biblical stories,  in this case Noah and his Ark.  Irony wasn’t supposed to be part of the script – nor was the terrific storm overhead –  while this performance was in aid of the victims of recent floods in Somerset.

The weather played a central role. While the thunder rolled and the lights of the sky dimmed to near darkness, it was hard to work out when the thunder wasn’t the timpani and if this was all a trick of a clever lighting director.  It was neither, as the performance progressed and the violence of the storm (in the story and outside) subsided.  The cowshed doors were opened to reveal bright skies and we indeed left the event in glorious sunshine and rather dazzled in more ways than one. 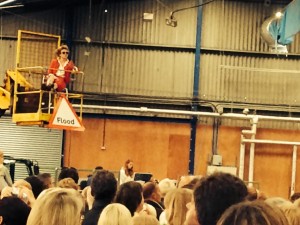 I have never experienced music quite in this way before.  Waves of sound, song, left to right, front to back, up and down. School children singing their hearts out on the perimeter, the Gossips wandering amongst us tunefully; central was Noah’s ark with principle singers and the orchestra facing us.  From high above, God  (played brilliantly by young Helena Bonham Carter lookie-likey Eleanor Westbrook) looked down – commanding Noah from her perch on a mechanical cherry picker.

Britten saw his audience for this opera as a “congregation”, and  so three hymns are inserted into the original text.  The audience simply sing along becoming involved in the musicscape.  This is truly engaging and accessible art, an opera for everyone. 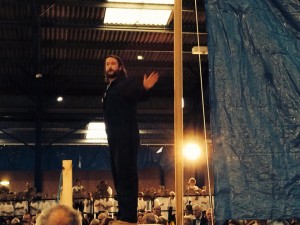 Jimmy Holliday had oodles of charisma and just grabbed your attention throughout.

The star of the show was perhaps Charles Hazzlewood himself, composer, theatre collaborator and maverick.  Throughout his career Hazzlewood seems to do things a little differently.  He started receiving acclaim in his 20′s and has gone on to conduct more than 100 world premiers and working with a mixed bunch of artists, from Wyclef, Professor Green, Nigel Kennedy and Steve Reich – even bringing orchestra to Glastonbury Festival for the first time. He is a Somerset man, determined to make classical music all-inclusive often performing in fields and floods and this was exactly what he delivered today.

3 thoughts on “Going Down Like a Storm – review of Britten’s Noye’s Fludde, presented by Charles Hazlewood with Kneehigh theatre company.”