A dichotomy, perhaps – on the one hand I strongly believe we can make whatever we want happen in our lives if we have an unfaltering belief in our ability to shape our future with a certain mind-set, while on the other hand I am aware of the fickleness of fate, as news reaches me this week of a friend’s sudden life altering illness.

It’s been a week of unexpected events crashing in my world, leading to a last minute dash to the Colston Hall  to see Carmina Burana performed by Bristol Metropolitan Orchestra with five different Bristol-based choirs, a cast of 350 performers. 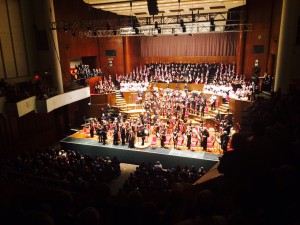 Bristol Metropolitan Orchestra amongst a cast of 350 performers of all ages.

The concert was in aid of St Peter’s Hospice – Bristol’s only adult hospice – a charity I have worked with for the past two years.

This is my third attendance at a Bristol Metropolitan Orchestra musical extravaganza. It was a packed programme, including Festive Overture Opus 96, Dmitri Shostakovich, Dvorak Symphony No. 9 in E minor ‘From the New World’. Remember the Hovis advert? Less known fact is that in the final movement you will find the  inspiration behind the Jaws movie theme.

Also on the bill was  a captivating piece (“Who will be there”) written and performed by St Peter’s Hospice Choir that I would  like to hear again, a download perhaps? However the main attraction was Carl Orff ‘s Carmina Burana.

The opening of Carmina Burana called O Fortuna is what most of us recognize. It is perhaps one of the most overused pieces of music in film and TV advertisements. When I listen I am reminded of Old Spice TV adverts, Omen (the film), as well as music for Somerset Carnival floats; all a little strange in their own way .

The piece has a dramatic start. The pace then quickens with jerky altering rhythm punching words, as choral singing descends to almost a whisper.  Then a steady crescendo of drums and short string and horn notes climax on one last long powerful note until it cuts out abruptly. The entire Carmina Burana embodies light, shade and sheer drama.

The themes of Carmina Burana are based on 11th, 12th, 13th century Latin verse about the uncertainty of the rise or fall of one’s fortunes – yes again that fickleness of fate, or sudden turn of events. It doesn’t matter that the words are in Latin, you get the mood of the piece, as strong as a slap in the face.

Composer Carl Orff was pretty much self-taught. His music is straightforward without the complexity of classical music harmonies or two or more simultaneous lines of independent melody. Maybe this is why it has such a wide appeal. The solo tenor and baritone require very high notes, which I do find strangely attractive – I am a child of the 80s after all. This  reminds me of why I like Jeff Buckley and Sigur Ros so much. 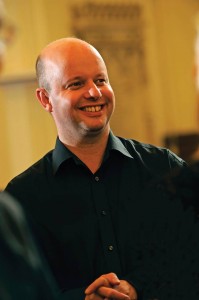 The conductor of Carmina Buarana tonight was David Ogden. David has a CV steeped in church music at the highest level – one of his compositions was performed by a 250-strong choir in the presence of Pope Benedict XV, no less. Displaying those powerful jerky gestures great orators use, David was commanding, enthralling, spell-binding to watch.

They pulled in a crowd in excess of 1,300 people at the Colston Hall. I saw primary kids, heard a baby, grandparents, parents, all lost in music. It’s accessible, it’s wonderful. Tim Grice the chair of trustees for the Bristol Metropolitan Orchestra told me the Orchestra is passionate about inclusivity, seeing what they do as “connecting the head with the heart”.

The heart of this orchestra, the driving force, is award-winning Film and TV composer William Goodchild. William is Bristol Met Orchestra’s principle conductor and the evening began with William at the helm. I’ve met William a few times now, working with him when I ran the Shepton Mallet Digital Festival. 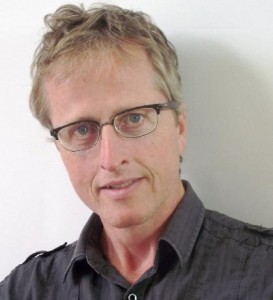 William Goodchild, as cool as they get. Photo by Rosa Fay Photography.

for the major broadcasters. He has also works with Bristol’s cutting-edge, genre-busting musicians like Roni Size & Reprazent. William is as cool as they come.

St Peter’s Hospice are the only adult hospice in Bristol. They need £18000 per day to run their services as they need to be on hand for a population of 1 million adults in Bristol. The chances are you or I will be affected by a life altering illness, directly or indirectly, our friends or family. Carmina Burana can stop you in your tracks, musically and thematically, unfortunately life has the habit of presenting you with such a wake-up call lending the need for charities like St Peter’s to be there.