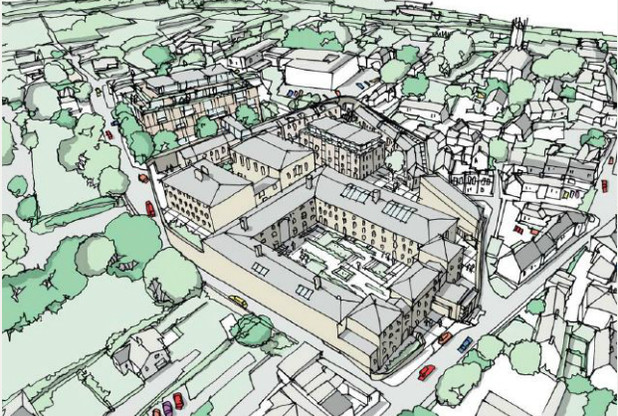 City & Country ran the third of four public consultations on the future use of Shepton Mallet Prison this week.   Once again the foreboding Prison gates were swung open to a queue of people keen to get inside.

This is a place that has shut out much of the local community since the 1600s, while housing the infamous – including the Kray brothers.

The Magna Carta, Domesday Book and the agreement signed between Neville Chamberlain and Hitler at the Munich Conference in September 1938, as well as the logbook of Nelson’s flagship HMS Victory and dispatches from the Battle of Waterloo, were all sealed up behind the 75ft Prison walls for safeguarding during WWII.

City & County say 600 people have been involved in the public consultation events, while just 120 people filled in their feedback questionnaire.  Shepton Mallet is home to over 10,000 residents, and is circled with numerous villages and communities nestled in the Mendip Hills, close by.

From an ancient prison to 160 residential units

Today, we were seeing the worked-up planning options or proposals that the team from City & Country – the developers who bought the site from the government – are looking to put forward for planning consent at Mendip District Council in January 2016.

The ideas are firmly focussed on turning the prison into a mainly residential space.

All very slick, very reasonable and very “nice”. That is what you’d expect when a national development company with a reputation for sympathetic reworking of historic sites, presents a blueprint to what it deems “stakeholders”, as City & Country did regarding the old Shepton Prison site.   It will be a disappointment for those who wanted to see substantial public use of the Prison buildings.

The site’s future is likely (and everything’s only likely at this stage, City & Country have stressed no firm decisions have been taken) to be as a repository of 160 new dwellings.  Of these, many are attractive mews style homes abutting the prison walls (which will be kept more or less intact), with others being created from the cell blocks of the Prison itself, the listed “treadmill” building, and yet more created in the workshop building next to the BT exchange, and a new three storey building which will rise within the walls, on the site presently occupied by some of the more “unsympathetic” modern buildings.

The homes look nice – on architects’ plans anyway – there is abundant open space and walkways around them, which will be open to the whole town. The workshop will be, we are reassured, smartened up. “If it looks horrible we won’t be able to sell any flats”, the people from City & Country argue.

Their aim, they say, is to “open” the area to the rest of the town.  An opening in the wall is being created where the site faces the Church, so the ancient prison and its new neighbours will be more visible than ever before to Sheptonians.

City & Country have been at pains to retain enough historic features to satisfy conservation quangos like English Heritage; even the barred windows will be retained in the core site.

A proposed café, museum and meeting space all in one?

So that’s what they want, but what is the town getting?

City & Country’s preferred option includes a cafe and an “engagement area” – about which they were pretty vague: might be a museum?  Might have a room for public meetings? Unfortunately, this area doesn’t appear very big in the plans, and its preferred location doesn’t seem to be in the historic prison itself or the treadmill building, but in one of the rather blander additions that are being retained.  It’s not a big space and certainly not a size to provide larger conference facilities, which the town needs.

Will a coffee shop with a few boards up on the site’s history really “do it” in terms of keeping the heritage of one of England’s most historic prison sites alive? Would it attract many visitors in this form?

There seems to have been no concrete conversations on the town’s regeneration or vision, which this historic asset could have helped forge.

Eco housing which limits one car per unit and an expected “walk to work in the town” or hop onto a bus?

Similar question marks formed over stakeholders’ heads when City & Country discussed their plans for parking on the site. The bulk of the cars will be kept on two floors of the workshop building with vehicular access to the main site fairly limited. So far, so pragmatic. But the option City & Country prefer envisages just one car space per residential unit.

They believe the purchasers of these 2 and 3 bedroom apartments will “know” they are only allowed one car and will largely work in the town, getting around on bicycles and the local bus network.

The reality, of course, is few purchasers will be as “eco” as the developers envisage and what may be reasonable in developments in Bristol and other big cities is not as realistic in such a rural area.  Residents’ second cars and those of visitors to the site will spill onto streets all around the town.

The new flats and houses (few of which will have any sort of private garden) will start at £110,000, we are told. That sounds great, considering the development is likely to have no social housing. Of course £110,000 is just the lowest end. What is the highest end, and, indeed, the average? These are questions of interest to those who might like to know if this is going to be a development for locals.

City & Country also presented what can only be thought of as their “doomsday” option,  which would feature social housing. In this, much higher buildings would tower over the site; 205 dwellings would be constructed, and only 75% would have parking spaces.

This is where City & Country play their trump card: Viability. Although the company bought the prison from the Ministry of Justice for a relative song, the costs of dealing with a town centre site, closely bounded by neighbours, on a steep slope and peppered with history that must be retained, are substantial they say.

City & Country hope to put in their planning proposal by January 2016, with a view to beginning work on the site by November 2016.

600 locals have visited the prison during the consultations, suggesting much interest in the site, but sadly only 120 filled out paper feedback forms – suggesting perhaps some confusion over what options the developers had presented?  Perhaps the high numbers of people wanting to come to the prison is simply reflective of the high interest locals have to look inside, while less interest is in City & Country’s technical drawings and options for windows.

A last chance to shape a vision for the prison’s future use and for the town?

Certainly there is not a clear vision for the future of the Prison, other than turning it into new housing that needs to measure up to City & Country viability counter.

It’s now up to the town, not to take its eye off the ball with this historic site in the next few months; to get involved; make its voice and preferences known. The prison was there for more than 300 years, and Shepton will have to live with the decisions made about what replaces it, for a long time also.

We urge people to sign up to Mendip District Council’s planning permission notification service – specifically to be notified about the prison planning proposal and Mendip District Council’s wider planning consultation.  That is the final place to have your say before the plans become a reality.  Here is the link: http://www.mendip.gov.uk/article/3203/Applications-Comments–Decisions.