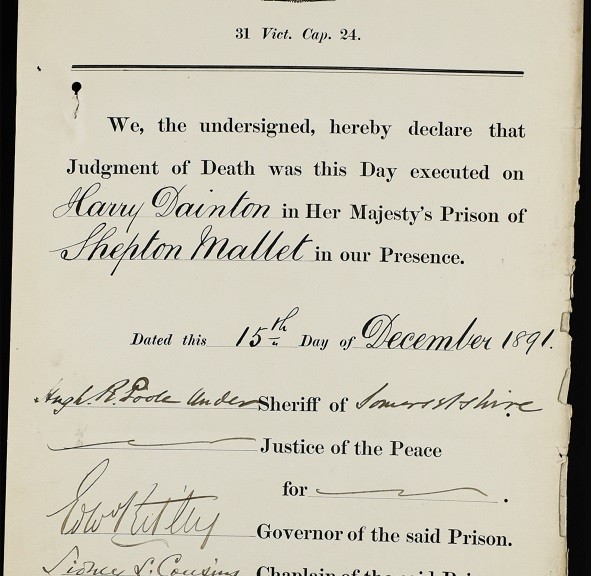 Shepton Mallet Prison’s future seems certain as a reincarnation into luxury apartment blocks by a high-end property developer who was sold this grade II* listed building by the MoJ. The development has been postponed until up to 2020, although work can begin any time, with just four weeks notice. However, questions are still being asked about those who have laid underground at the site for up to 400 years.

The prison owners, developer City and Country, have never spoken publicly about how their plans will affect the bodies of the executed or those who succumbed to hard labour or people who simply died because men, women and children were housed in cramped, dank, disease-ridden conditions with little or no food or water. Presumably many would have perished in such circumstances.

Trish Dainton from London has a keen interest in how the bodies are being dealt with in light of the new lease of life the prison is having. Trish’s understanding is that her late husband (Steve Dainton) may have had family connections to one of the prisoners hanged at the prison in 1891. Henry (Harry) Dainton was hung on 15 December 1891 for the murder of his wife Hannah in Bath. At his trial, he had been committed to hanging after just 12 minutes jury deliberations. The jury also gave a recommendation to mercy.

A petition, signed by 500 people, was sent to the Home Secretary ‘praying for the commutation of the sentence of death’ but to no avail. Read more about Hannah’s tragic death and Harry’s court case here.

Trish’s husband died in his 40s of a devastating condition called Huntington’s disease (HD). The disease can impact upon a person’s mental as well as physical being.  Read more about HD here.

Trish, having been told of a past murder in the family was curious as to whether HD could have played a part?  HD can be passed down from generation to generation. Trish’s husband, his father and grandfather all died from the disease. Trish is still investigating how, or even if, Hannah and Harry’s family tree and bloodline links into her late husband’s branch of the family. However, this curiosity led Trish to Shepton Mallet Prison, where Harry is buried.

Mark Horton, a professor in archaeology at the University of Bristol – and has regularly appeared on television programmes like Channel Four’s Time Team and the BBC’s Coast – believes City and Country must be clear about how they are to treat human remains at Shepton Mallet prison, ensuring sensitivity, he has spoken on record to the local media and BBC saying:

There could be large numbers of bodies buried at a prison in Somerset and developers planning to build on the site should “do the right thing by treating them with respect.” The professor’s view is that Shepton Mallet Prison is one of “the most important ancient prisons in the country” and its history “should be respected”.